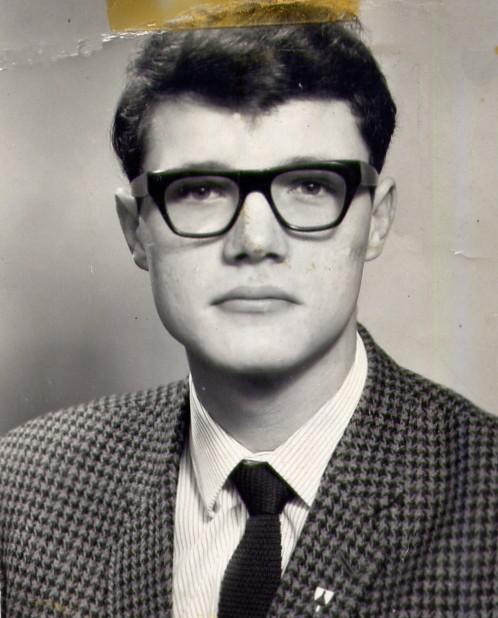 In January 1964 I was 20 years old, living in England and knew everything. The Beatles had just become world famous and the new rime Minister was Sir Alec Douglas Home. The Conservatives were in power and a pound £ sterling was worth $US2.80.

I had finished my training with Cable and Wireless to be a foreign Service, F1, Radio Engineer and learned I had been posted to Nairobi, the capital of Kenya.

During that first week I gave my car BAM 746 to my father and went up to London by train to visit Head Office. They gave me my tickets for the trip and while I was up ‘in the smoke’ I went to Regent St to buy some clothes for a hot climate and went to the theatre.

The first week ends here on a Sunday, each week will run from Monday to Sunday

During which our hero digs the garden, tries to draw some money from the bank and eats a handsome meal, with wine.

My mother lived in Waterlooville and I spent this week at her place helping to move the chicken run from one part of the garden to another. I had a letter from C&W Head Office with £7 tax refund.

Later, I went to the bank to draw some cash, and had quite a problem trying to convince them who I was. The reason being my bank details showed I lived in Cornwall. My mother started back at work, she was a teacher at a local school, and Len, my mother’s husband, made us a grand dinner one evening.

Then at the weekend mother entertained us with chicken and mushroom pie and we shared a bottle of white wine, Grave 1959. How the great and noble live.

I feel a bit fed up this week hanging around waiting to leave and nothing to do. Called on Thelma Coombs the sister of Mike Coombs. Mike was a boy scout at the Grammar School, and joined the navy, Thelma was very jolly and attractive. Also had a letter from Margaret the trainee school teacher departed girl friend, much to my surprise. I shall have to answer it.

Went to the pictures with school friend ‘Sid’ Janes to see a Peter Sellers film ‘Heavens Above’. A truly British black and white film with all the old post war favourite actors type cast and hamming it up: Cecil Parker, Ian Carmichael, Bernard Miles, Eric Sykes, Irene Handl, Miriam Karlin , William Hartnell (the first Doctor Who), Roy Kinnear, Malcolm Muggeridge , Derek Nimmo and Cardew Robinson. Just the sort of truly British epic nonsense to watch before you go off to the tropics to explore the British Empire.

In which our hero sets off by sea for Africa
This week my colleagues and I are away, off on the SS Braemar Castle from London to Mombasa. Earlier in the week I visited my old school, Portsmouth Southern Grammar School for Boys and presented them with a book for the library. A small gesture of appreciation for their scholastic endeavours in trying to get me to learn something. Also went looking for a camera and bought a twin lens reflex in Marmion Road, and a roll of 120 film. Said farewell to my father and grandma and various aunts and picked up £20 of Travellers’ Cheques.

On 23 January my mother dropped me off at Havant Railway station and I headed to London with my suitcase. I met brother John and we went to the East India docks to meet Jack Cooper and Pete Johnson, two lads from my course also going to Nairobi. Jack was a keen drummer, rock and roll enthusiast and full of energy. Pete was a bit quieter and had earned the Duke of Edinburgh Silver award, that is quite an achievement. I am now on the Nairobi staff payroll.

The SS Braemar Castle is a ship of the Union Castle line and plied a route largely around Africa to and from London and South Africa. We cast off in the evening and by 10.00 the next morning I could see the Isle of Wight in the distance as we heading for the Bay of Biscay. That has a reputation of being a bit rough, and I did retire to my bed. We were invited to the Captain’s cocktail party and joined in with the other guests, many of whom were heading for an uncertain future in South Africa. Which was expressed by Macmillan in his so called ‘Winds of Change’ speech . The Colonies are getting their independence.

Next week the rock of Gibraltar, Naples and Port Said at the mouth of the Suez Canal.

During which the three of us visit Gibraltar, Naples and Port Said, and I have thoughts of HMS Eagle.

On Monday 27th January, 1964 we three intrepid Cable and Wireless lads, Jack Cooper, Pete Johnson and myself on the SS Braemar Castle, reached the Rock of Gibraltar. We went ashore and met up with Eddy Pelc. We had known him from PK college days and he had been posted here some months earlier. He took us up to The Rock Hotel in his open top Mercedes. Eddy was quite a character.

A few days later as we sailed off Sardinia we waved at the SS Edinburgh Castle on its return voyage to London. We sailed on to Naples and the three of us went ashore. What a scruffy, run down city this was with hundreds of Fiat 500 cars. We visited a cameo factory to watch cameos being carved, and I bought a pair of cuff-links which I later gave to a girlfriend as a memento. We also went to Pompeii to see the ruins and the paintings. Back at sea the next day passengers were invited to watch out for Mt Stromboli at night. So we stayed up late and witnessed the faint red glow of the volcano on a chilly, windy Levantine night.

Sunday, 2nd February we arrived at Port Said (pronounced ‘side’), the entry to the Suez Canal. I was amazed how far from land we were when the sea turned from bright blue to muddy brown due to the disgorge of sand from the River Nile. At Port Said we went ashore and were greeted by gully gully men selling souvenirs. I bought a leather wallet with a picture of a camel on it, and a wooden case cigarette holder. (everyone smoked on those days)

As we made our way through the sea I reflected on HMS Eagle, my father’s ship, an aircraft carrier in WW2 which was sunk in the Mediterranean on its way to Malta at 13.15 hrs on 11th August 1942. The ship was torpedoed by a German U boat, U-73 and 131 officers and men went down with the ship. My father jumped into the sea with hundreds of others amidst the oil and swirling waters, he was rescued and sent back to Portsmouth. It was there he met up again with the young attractive Myra Simpson and a few months later, October 1942 they were married. He was stationed ashore nearly a year and left to join HMS Queen Elizabeth for Scapa Flow on 27th August, 1943. and I was born a week later.

So you will understand why I feel strong connections with the Mediterranean Sea. Incidentally, the 11th August, the day the Eagle went down, was the day before my mother’s 20th birthday. That was the first time she had news of someone she cared about who was abroad and involved in a serious accident: alive or dead Not Known.

But not the last time.

Next week the weather heats up, our hero sails down the Suez Canal but falls ill and misses Aden.

During which the weather heats up, our hero progresses along the Suez Canal but falls ill and misses Aden.
We sailed on through the Suez Canal and I just marvelled at how long and wide it was, like a never ending water way cut through the sand. I played deck quoits in the sun and swam in the pool and the temperature went up to 69°F (about 20°C) not bad for February.

But I caught a bug somewhere and was sent back to my cabin by the ship’s doctor. So when we reached Aden I was not well enough to go ashore. Jack Cooper picked up some mail for me at the C&W office and I got him to buy some Robert Piguet perfume for my mother. (No idea how much it was then in Aden, but today in England it is £95 a bottle).

Later I see I was well enough to go to the Saturday night on board Fancy Dress dance.
Next week cross the equator, arrive in Mombasa and on by train to Nairobi.